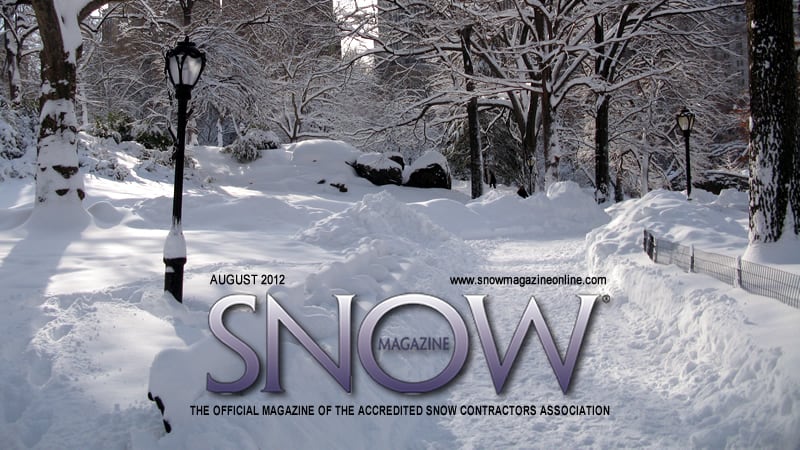 While it’s taken nearly a quarter century for George Stoll to let go, he’s finally at a stage where he feels comfortable giving his employees more responsibility. The owner/operator of George Stoll Construction has provided all phases of snow removal service—from basic snowplowing to salting, sanding, and liquid de-icing—for commercial properties in the Empire State’s Rockland, Orange, Putnam, Westchester and Dutchess counties for more than 25 years. In the wintertime, he employs approximately 60 employees; he carries more staff for the construction side of his business that operates year-round.

“I have a problem with that,” he says of not micro-managing his staff. “I try to do everything myself and have a hard time handing things off. The older I get though the easier it’s become.”

“I have a problem with that,” he says of not micro-managing his staff. “I try to do everything myself and have a hard time handing things off. The older I get though the easier it’s become.” George Stoll

Stoll has a couple of key guys he’s groomed to be leaders over the years. “They make all the decisions onsite when I’m not there,” he says. “I tell them, ‘we are going to live and die by your decisions and after it is all done, we will rehash it and see what we could have done better.’ I give them the authority to make that decision. After that, I promise them that I won’t ream them out, but we will sit down and see if there was a better path we could have taken.”

During the winter, Stoll hires existing business owners who run their own seasonal businesses outside the snow removal industry. “They know what it’s like to run employees and when equipment goes down that they can’t stay there,” he explains. “By doing this, I eliminate a lot of the ‘nonsense’ of the responsibility factor. I have a couple of key guys that I grew up with that I hire and I pay them very well.

“They come out there to earn some ‘blood money’ during the middle of a snowstorm and then they get the aggravation of the 15 guys that are at their site and I don’t have any interaction with the employees other than a quick check in,” he adds. “I go at it a little bit different. I would rather pay those guys a little more money as I don’t have to hire them all year round.”

Stoll says that to carry an employee like that might cost up to $100,000 when you add in insurance, bonuses, etc. “They are good guys  and they know what they are worth, so I give them a hourly rate with a bit of a bonus system that can be attached to inches, hours worked, etc.”

Having incentives such as this helps motivate these employees and also makes them better leaders.

“When you hit a threshold such as you’ve worked more than 60 inches of snow, I’ll give them an extra $5,000 for example,” Stoll adds. “Something like that goes a long way. It’s the dangling-carrot theory. They know they are putting the hours in, but there is a bit of a reward at the end of the rainbow … that’s what I do. I don’t carry just snow employees, they are all winter employees.”

LEARN TO COACH
When it comes to motivating his staff and grooming effective leaders, Scott Zorno, co-owner and operator of Care Enterprises Snow (based in the Colorado highlands) believes in the management theory of coaching and mentoring. The rewards are endless, he says.

The entrepreneur has been in business for 36 years, having started his small business while a university student. He employs two full-time staff and six subcontractors. While a small family-run operation, he still does some leadership development.

“You always have to do a little bit,” Zorno says. “The biggest thing I do is to take and make a guy a site lead and coach him more thoroughly on what the customer’s expectations are … inject him with a little judgment, so he, as site lead, meets the customer’s needs.”

The Certified Snow Professional also treats his subcontractors like full-time employees. He admits one of this site leads is a sub and while there was a real learning curve initially, but once he coached him, the transformation in his confidence and leadership level was amazing.

“The business model that he was working from historically before he came to work for me was so much different than the one that I work to that it created all kinds of hassles and heartache initially, but we got through it,” Zorno explains. “I knew he had the skill and I knew that he was a team lead in his normal job, so I wanted to give him one more chance, but knew I had to coach the crud out of him.

“Once I did that and really gave him an insight into the relationship I had with the customer and their expectations that was the combination that turned the corner and he has been great leader ever since.”
As Zorno touches on, sometimes the biggest tool you can give your employees to make them more effective leaders is information. It’s not necessarily the technical skills.

“I’ve got another guy that I’ve put on a route in a very upscale residential neighborhood,” says Zorno. “I wasn’t worried about his technical skills, but I took him with me when we went out and marked the driveways and introduced him to the customers, so they could go, ‘older fellow with grey beard driving a truck, that’s one of Scott’s people.’ It helped a lot to cement my belief in him and my expectation of him to feel free to have a relationship with these people.

“To have these customers look at the window at 6:15 in the morning and see this ratty old Ford Bronco, when he waves at them, they know that’s Dudley and I know his skill because he’s been doing it. A little bit of consistency helps too. Not moving him around and giving your employees something they can take ownership of.”